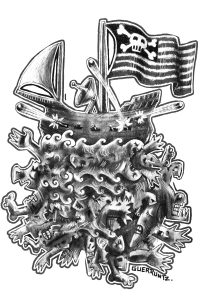 The U.S. military rescued a U.S. ship captain who had been taken hostage by “pirates” off the coast of Somalia in April. Members of the U.S. Navy killed three Somali teens who were holding the captain hostage on a lifeboat after they attacked a U.S. cargo ship.

Attacks on ships off the coast of Somalia, a country in east Africa, have soared in the last year, according to the U.S. Maritime Bureau. But, while attacks have been labeled a top threat to ships in the region by the U.S. government, the main reasons for the attacks have been ignored— illegal fishing by big foreign fishing companies and the pollution of Somali waters.

Illegal fishing off the Somali coast by foreign fishing companies means there are a lot fewer fish in the sea for the local Somali fisherman who need to make a living. European companies have also been using Somali waters as a dumping ground for waste, including harmful chemicals and nuclear waste. “Somebody is dumping nuclear material here,” Ahmedou Ould-Abdallah, a United Nations representative in Somalia, told British journalist Johann Hari.

“There is also lead and heavy metals such as cadmium and mercury – you name it.”

After a tsunami in 2005, Somalis reported barrels of toxic material washing up on shore and making residents sick. One of the Somali pirate leaders told Johann Hari, “We don’t consider ourselves sea bandits. We consider sea bandits [to be] those who illegally fish and dump in our seas.”

5 thoughts on “Pirates on Somali Seas”