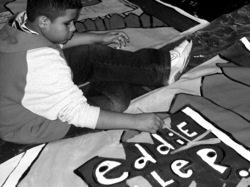 Students in New York City participating in the Border Crossers after-school program studied the issue of unequal funding for schools. They painted this mural and described their artwork:

The second theme in the mural is tracking. By saying tracking, we are trying to say not to make groups that separate people. And that when immigrants come to America, the tests should be fair to them. We drew pictures of what we would want a fair school to look like.

The third theme is school funding inequity. We wanted to show that every school should have the same amount of money. We also thought that people with less money shouldn’t pay a higher percent of taxes for school than people with more money. 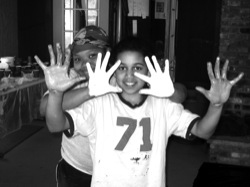