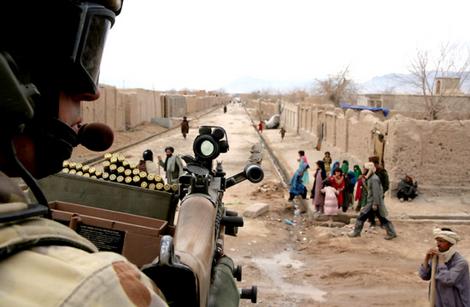 A U.S. soldier prepares for battle in an Afghan village. Photo: INDYMEDIANZ.ORG

By Bill Marsh and Amanda Vender

Most Americans now oppose the war in Afghanistan. A Washington Post-ABC News poll found that 51 percent of Americans see the war as not worth fighting, up 6 percent from July.

As for the Afghan people, the majority would like to see U.S. troops out of Afghanistan within two years, according to a separate BBC and ABC poll. The same poll shows that one in four Afghans believe it is right to attack U.S. soldiers in their country.

The two polls express doubts similar to those of some elected officials in Washington. “After nearly eight long years, we seem to be no closer to the end of the war in Afghanistan… many Americans, and many Afghans, wonder what we hope to achieve—and when our service members will start to come home,” wrote Senator Russ Feingold of Wisconsin in an August Wall Street Journal opinion article.

The U.S. war in Afghanistan began eight years ago after the attacks of September 11. 2001. The U.S. government said it wanted to destroy the Al Qaeda organization that it said was behind the attacks.

In early 2009 President Obama authorized a 17,000 U.S. troop increase in Afghanistan. President Obama is now seeking another troop build-up. Despite increasing opposition to the Afghanistan war, House and Senate Democrats are expected to support Obama’s request for more troops.

48: number of U.S. Troops killed in Afghanistan in August, the deadliest month since the start of the war

1 thought on “Opposition to War in Afghanistan Grows”