Obama: Three More Years of War in Iraq And More Troops to Afghanistan

By AMANDA VENDER and ERIN THOMPSON

For Larry Syverson of Richmond, VA, a father of three sons who have served in Iraq, this is not good enough. “The American people and the Iraqi people want this war to end. If President Obama is not willing to end it once and for all, then Congress will have to force him to by refusing to fund its continuation,” he said.

Syverson’s organization, Military Families Speak Out, is urging people to call their members of Congress to tell them to stop funding the war. In Afghanistan, one of the poorest nations in the world, Obama has ordered an expansion of the fighting saying, in a speech to Congress, “I will not allow terrorists to plot against the American people from safe havens half a world away.”

In February, Obama ordered 17,000 new troops to deploy to Afghanistan. The total number of U.S. troops there will reach 55,000 by the summer. More than 2,000 Afghan civilians were killed due to fighting in Afghanistan in 2008, according to a report by the United Nations. U.S.-led forces were to blame for nearly 40 percent of the civilian deaths. 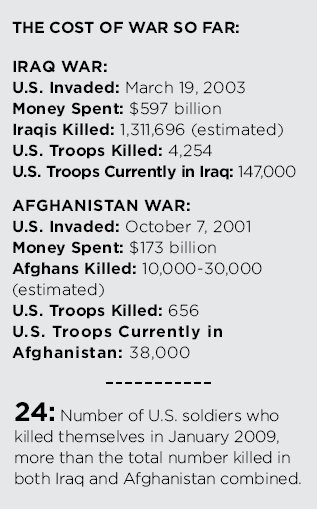