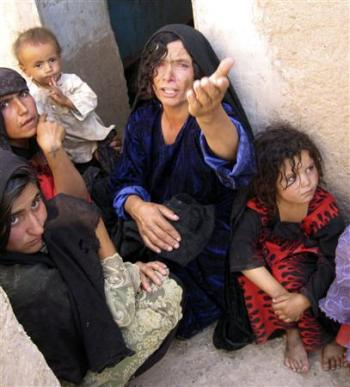 An Afghan woman cries after losing family members in a missile attack on her village. Photo: flickr, publik16

Speaking at the United States Military Academy at West Point in early December, President Obama announced that he would send 30,000 more troops to Afghanistan, bringing the total to about 100,000 U.S. troops. However, the majority of Americans are against the war in Afghanistan, according to a CNN/Opinion Research Corporation poll.

The current U.S. war in Afghanistan has lasted over eight years, making it one of the longest wars in U.S. history. The Afghan people continue to suffer the effects of years of war. The Soviet Union invaded Afghanistan in 1979 but was defeated, nine years later, by Afghan warlords backed by the United States. Now the United States is battling the Taliban with the help of the same warlords.  Zolton Grossman, a geographer and writer with Counterpunch.org, called this “a cycle of violence that has since [1980] claimed more than two million Afghan lives.” In addition, at least 860 members of the U.S. military have died in the Afghan region since the U.S. invasion in 2001, according to the U.S. Department of Defense.

During his campaign, Obama promised to send more soldiers to Afghanistan, and he is now keeping that promise. Upset by Obama’s announcement, people protested in more than a hundred U.S. cities. Two hundred people gathered in front of the West Point academy, including Cheryl Worth from Peace Action New York State. “We want to see the change that we voted for,” said Worth, “and we are expecting [Obama] to include us in this conversation.”

warlord: a military leader who has taken power, especially in one section of a country.