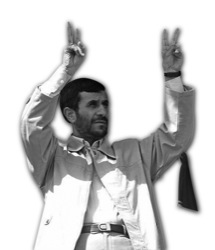 Iran doesn’t have nuclear weapons, but the United Nations Security Council is worried that it might be trying to make them. Iran did not meet the UN’s deadline of August 31 to stop its enrichment of uranium, a process that can make energy or weapons. As a result, the Bush government is pushing other countries to consider creating sanctions, or punishments, for Iran for enriching uranium.

Iran’s President Ahmadinejad says that Iran is working to develop nuclear technology to make energy for peaceful reasons, which is legal. But some U.S. military officers say that the Bush administration is making plans to attack Iran to overthrow the government as it did in Iraq.

Iranian journalist Akbar Ganji is concerned about the dangers of nuclear technology. But he said in an interview with news program Democracy Now! in August: “Our first demand and our first concern is to make sure that there is not going be a military invasion against our country. We do not want war.” –AV

A look at the number of nuclear weapons in the world: The United States is the only country to have ever used nuclear weapons against another country when it bombed Japan in 1945, killing about 214,000 people.