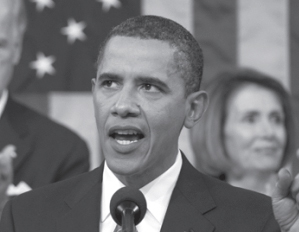 President Obama was awarded the Nobel Peace Prize, a very prestigious award given to people who have made major contributions to world peace. The Nobel Committee said it gave the prize to Obama because of “his extraordinary efforts to strengthen international diplomacy and cooperation between peoples.” Many people feel that Obama does not deserve the prize, in part because he is continuing the wars in Iraq and Afghanistan. Journalist Naomi Klein said that the choice represents a “cheapening of the Nobel Prize.”

Over 100,000 gay rights advocates and supporters marched to the Capitol in Washington, D.C., on October 11 to demand equal rights—including the rights to marry and to serve openly in the military. Many speakers at the march showed disappointment with President Obama’s actions, including pop star Lady Gaga, who shouted, “Obama, I know you are listening…We will continue to push you and your administration to bring your words of promise to a reality.”

The U.S. military said it had its best recruiting year since 1973 and that it met all of its recruiting goals. An increase in military pay, a higher budget for recruiting and wide-spread unemployment helped increase enlistment. 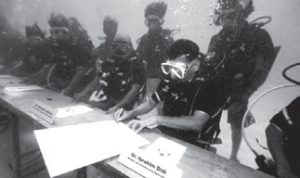 The Republic of Maldives, a country of islands in the Indian Ocean, held an underwater meeting on October 17 to protest climate change. The meeting was attended by the President of Maldives and his cabinet, who wore scuba suits, communicated through hand signals and signed documents while fish swam by. The meeting was meant to draw attention to the rising sea levels caused by global warming that threaten to completely submerge Maldives.

The United Nations Human Rights Commission (UNHRC) criticized Israel for its attack on Gaza, an area of land occupied by Israel, that took place in January 2009. The commission, led by South African judge Richard Goldstone, put out a report saying that, despite Israel’s claim that it acted in self-defense, Israel’s actions had been directed at the Palestinian people of Gaza as a whole. The report said that both sides committed war crimes. Over 1,300 Palestinians were killed in the Israeli attack, the majority of them civilians. Nine Israelis were killed by Palestinians.