On September 23, world leaders met in New York City to attend a special United Nations summit on climate change. The summit aimed to put in place realistic plans to reduce greenhouse gas emissions by 2020. The average temperature has already increased 1 degree Celsius since pre-industrial times, and across the globe the past five years have been the hottest on record. Currently global emissions are on track to cause potentially catastrophic climate change as early as 2040. This summit aimed to avoid that outcome, but there were no significant commitments from the biggest polluters, China, the U.S. and India to reach the UN’s goals. 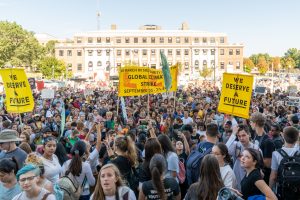 “This Is Our Future”: Youth Demand Action on Climate Change Now

Four million people protested on September 20, making it the largest day of action against climate change. The student climate strike, named #FridaysForFuture, was inspired by the 16-year-old Swedish activist Greta Thunberg, who began skipping school on Fridays to protest outside the Swedish parliament in August 2018. Varshini Prakash of the Sunrise Movement said that politicians have not adequately addressed this crisis, and it’s time for young people to demand a safe future: “We have grown up seeing the political establishment fail us. And for twice as long as I have been alive on this planet, we have known about the crisis.” Greta Thunberg added, “Together and united, we are unstoppable. This is what people power looks like. We will rise to the challenge. We will hold those who are the most responsible for this crisis accountable, and we will make the world leaders act. We can, and we will.”

Amazon Rainforest on Fire: Record Devastation to the “Lungs of the World” Continues

More than 80,000 fires have been burning in the Amazon rainforest so far this year. That’s double the number of last year and is the most ever recorded by the country’s National Institute for Space Research. Scientists say that this has more to do with human activities, such as deforestation, than drought. Brazil’s far-right president, Jair Bolsonaro, came into power promising to clear vast tracts of the rainforest for development at the same time as weakening protections for the environment and indigenous communities. Illegal logging by “Rainforest Mafias” is also to blame, according to a new report by Human Rights Watch.