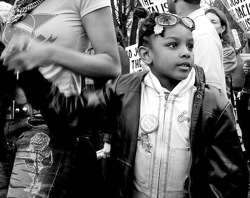 Chanting “50 shots equals murder!” about 800 demonstrators marched through several neighborhoods in Queens, New York, on Friday, April 25. They were there to protest the “not guilty” verdict of three police officers in the Sean Bell murder case. The officers fired 50 shots and killed Bell, a 23-year-old African American, the night before his wedding in November 2006. Two of his friends were severely wounded. All three of the men were unarmed.