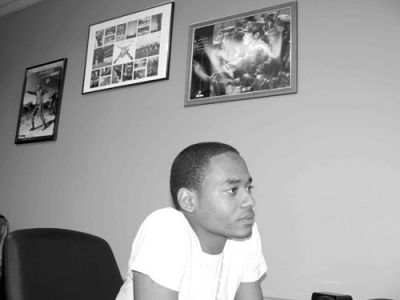 Dan Brown, age 20, signed up with the U.S. Marines in September after spending five months looking for a job and not finding anything. Brown, a Jamaican immigrant, said that one of the advantages of enlisting is the chance to receive U.S. citizenship. PHOTO: JAISAL NOOR

When New York City high school student Sierra Boyd talked a friend out of joining the military, she got something she wasn’t expecting: an angry call from her friend’s recruiter. “He’s yelling at me on the phone, ‘you need to mind your business.’”

Incidents like this one stirred investigations and campaigns to limit the military’s access to students. For the last six years, the Students Not Soldiers Coalition has lobbied New York City Schools to adopt formal rules for military recruitment in public schools. Now there is a new policy in New York City schools that says military recruiters are no longer allowed to use class time for recruitment. Schools must also make forms available that students can sign to say that they do not want their contact information given to the military. The new policy could affect what military recruiters are allowed to do in schools in other parts of the United States.

Even if the new regulations are followed, activists are concerned about military recruiters being in schools in the first place. “Many kids don’t know that the military spends millions of dollars each year making movies like Transformers and videogames to make the idea of war more appealing. Because kids think that there are no consequences to war, they are more likely to sign up,” said Denise Romero of the Ya-Ya Network. Ya-Ya is a youth-based organization that advocates for students’ rights. “We believe that school and classroom time is for learning, and not for the military,” added Ya-Ya’s Jennifer Lee. “The military needs to get out of schools.”