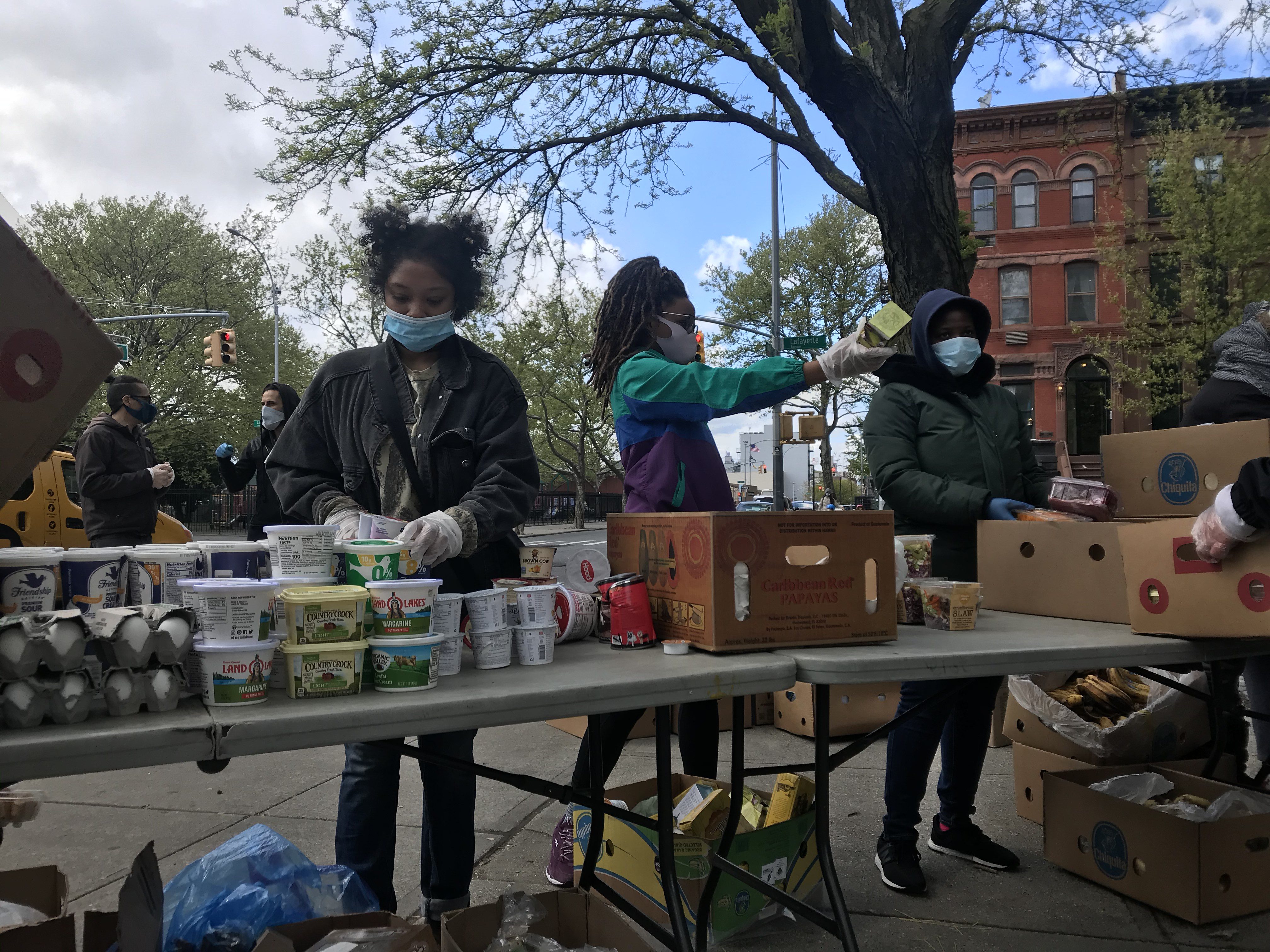 Photo courtesy of @IOHnyc Instagram. In Our Hearts NYC, an Anarchist network of activists whose mission is to build a culture of resistance, holds a ‘Food Not Bombs’ mutual aid pantry in BedStuy, New York.

Tod Robbins, the founder of Utah Valley Mutual Aid, received a call from a woman speaking Spanish, a language he was rusty in and hadn’t practiced since college. But he knew from her voice that she was desperate. So he called Cesar, a Spanish-speaking volunteer within his mutual aid network, who was able to help the woman and provide her and her family with the assistance they needed.

Since the outbreak of the novel coronavirus in the United States, mutual aid groups like the one Robbins is part of have sprung up across the country. Mutual aid organizations are community-driven efforts to help people, in this case, people most vulnerable during the COVID-19 pandemic: the elderly, the immunocompromised, those with preexisting medical conditions and those who are facing catastrophic economic hardship.

Many state and federal relief programs were set up in the wake of the outbreak to account for the loss of income to families and individuals across the country. However, the impact on undocumented people and minority communities has been extremely disproportionate. Undocumented immigrant workers were not entitled to the $1,200 stimulus checks provided by the federal government, meaning that even those who are not sick or vulnerable to the virus are at risk of going hungry or becoming unhoused. With the steep price of grocery delivery apps, food banks and mutual aid projects have become a lifeline for many.

Before this pandemic, mutual aid was a lesser-known concept. It was developed by Peter Kropotkin, a Russian geographer and writer, in his 1902 book Mutual Aid: A Factor of Evolution, which stated that “sociability is the greatest advantage in the struggle for life.”

Dean Spade, professor of the Seattle University School of Law and founder of the Sylvia Rivera Law Project, said in an interview with Democracy Now! that mutual aid, as opposed to charity, asserts that the reason people are in need of something is not because the individual has done something wrong, but because there is something wrong with the system. Mutual aid is not about “saviorism” or determining who has the right to receive aid, but about communities coming together and forming grassroots organizations to solve problems immediately in a bottom-up direction, instead of a top-down one.

The sudden rise in mutual aid efforts across the country may be due in part to a distrust in the government, which some say is not doing enough to help people impacted by the coronavirus. “[Mutual aid is] when people band together to meet immediate survival needs,” said Spade, “usually because of a shared understanding that the systems in place aren’t coming to meet them.” Thus communities are taking matters into their own hands by trying to help vulnerable people and keep them safe.

Invisible Hands is a mutual aid organization based in New York City, the epicenter of the coronavirus pandemic in the United States. They deliver groceries, prescriptions and other necessities to people in New York and parts of Jersey City who are particularly vulnerable to COVID-19. According to their website, it was founded by Simone Policano, Liam Elkind and Healy Chait to help support and protect the New Yorkers whom this crisis is threatening the most.

In the West, Robbins’ Utah Valley Mutual Aid provides groceries and medicine, as well as connecting people with resource-sharing networks. “No one in my community asked for this hardship or deserves to be threatened,” Robbins said in an interview with IndyKids. His motivation is his belief in the goodness of people and that every life matters.

These community efforts show that not all aspects of this time are doom and gloom. Longtime mutual aid organizer Mariame Kaba said in an interview with Democracy Now! “One of the most important parts about mutual aid has to do with changing the social relationships that we have amongst each other. In order to be able to fight beyond this current moment, beyond the current crisis, beyond the current form of a disaster that we’re trying to overcome.” As these efforts are predominantly hyperlocal, people are building new connections with those in their immediate communities, which is creating a foundation for future political action. In a time when all we hear and see is ever-rising graphs and real-time case counters, this is proof that when the world is at its worst, humanity can be at its best.