Aslan is the author of two books, Young Water Protectors and Young Native Activist. He is a citizen of the Lipan Apache Tribe of Texas.

When we arrived at the Oceti Sakowin camp, there were thousands of tents and tipis set up in front of the sun setting on the horizon. It was South Dakota in October 2016, and very cold. There was a large fire being lit in the camp, and you could hear hand drums and singing. It was a very nice feeling to be around so many other Native people protecting the sacred land and water.

This camp was a historic gathering of indigenous nations from across the continent. We were there to protest a pipeline company trying to build an oil pipeline through the water supply of the Standing Rock Sioux Tribe. Oil pipelines can leak, and if it leaked into the water, it would poison their water supply. We were protecting the water to stop that from happening. The Standing Rock Sioux Tribe is a nation of Native Americans of the Dakota and Lakota people. It is their ancestral homeland, and they have lived here for longer than anyone actually knows. 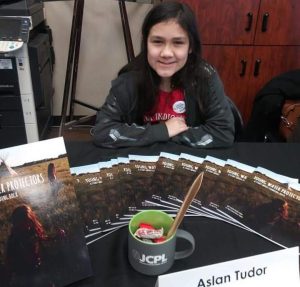 I wanted to write the book, Young Water Protectors, because there were hardly any resources out there about what happened. There were no resources for kids, and kids need to know what happened and why. My second book, Young Native Activist, is about my life as an activist and standing up for Native rights. Some of the subjects I talk about in my second book are racism, sports mascots, Leonard Peltier, changing Columbus Day to Indigenous Peoples’ Day, and defending sacred sites.

We, Native Americans, still exist today. We are not just in history books. We are active in our cultures and Native rights issues. We want to be respected as the original keepers of this land.