Melting Ice: A Report From Alaska 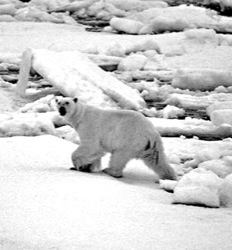 In the last four years Alaskans have seen warmer winters and summers. Barrow, Alaska, is in the Arctic Circle and is the northernmost town in the United States. There used to be miles of ice that went beyond the shore as far as the eye could see. In Barrow, they called this ice “pack ice.” But now it’s gone.

Pack ice was used by the polar bears and humans to hunt the seals and whales they needed for survival. Now polar bears have to swim longer and farther, facing more danger, to bring food back to their families.

Many scientists blame global warming on greenhouse gases that come from burning fossil fuels, such as oil in cars and diesel in power plants. Some simple things you can do to help are encouraging your parents to drive cars that save gas, using more efficient light bulbs and planting a tree.