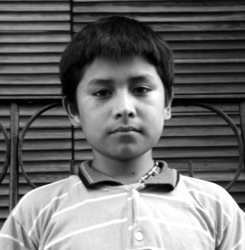 Parents: Noe’s mother and father are craftspeople who make clothing and jewelry to sell on the streets of Oaxaca City.

Siblings: Noe has five brothers and sisters, four younger and one older.

Career: Noe wants to be a soccer player when he grows up.

How are you?: Como estás?

Poverty: 50% of Mexicans live in poverty