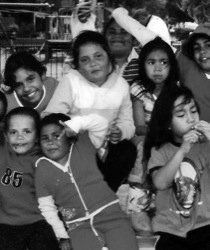 Marlea, center, at her brother’s birthday party. The other kids in the photo are Marlea’s cousins. Photo: Leonie Mason

Religion/Culture: Aboriginal culture is an oral culture of storytelling, dancing, singing and the Dreamtime. The Dreamtime story of creation says that our ancestors walked the earth and created things from dreams and visions.

Living situation: “I live with my mum and my little brother David.”

What she wants to be when she grows up: A police officer

What she knows about the United States: “There are lots of people, and they speak funny.”

Koori is a dialect of English, meaning that it is mostly like the English we know, but it has some different vocabulary, grammar and pronunciation. Some examples:

Having a yarn: talking

History: Australia has been inhabited for more than 42,000 years by indigenous people. Australia was colonized by Britain in 1770 and became a self-governing commonwealth in 1901.