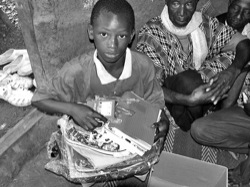 Name: Mamady Conde, age 11
School: Morignoumaya Village, Guinea, West Africa
Languages: Mandingo and French
Religion: Muslim
Favorite subject in school: Poetry
Favorite hobby: “I like to play football (soccer).”
Family: Mamady lives with his uncle who is a farmer in the village.
What he wants to be when he grows up: “I would like to be a driver.”
-BY SAA ROBERT MILLIMOUNO, AFRICAWRITES.COM