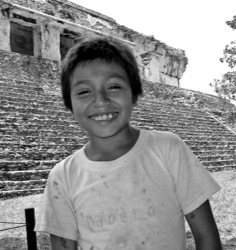 Languages: Ch’ol, one of seven indigenous languages spoken in Chiapas, and some Spanish.

School: Jesus Pedro does not go to school. He wants to go to school, but the school won’t accept him because he’s too old for primary school and he doesn’t meet the academic requirements for secondary school. The reason why he missed so much school is that he is usually helping his grandmother with their farm.

Work: Jesus Pedro and his family plant corn, beans, pumpkins, avocados and oranges. They produce a lot of corn, which can be used for tortillas, tamales (cornmeal wrapped in corn leaves with vegetables and meat), posol (a cold, sweet drink) and atol (a warm drink made from corn). Jesus Pedro also goes with his aunt to the archeological ruins of Palenque, where they sell handmade souvenirs to tourists.