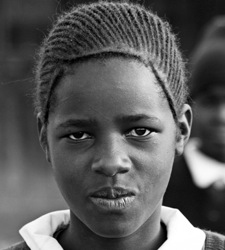 Jackline is a 14-year-old student in Kenya. Both her parents died of AIDS. Photo: Alex Stonehill

Family: She lives with her grandparents — her parents died from AIDS.

More info: Jackline attends a school for orphans. The students eat most of their meals at the school, even on the weekends, because their surviving guardians often can’t afford to feed them. Despite the challenges the students have faced, their school is consistently one of the highest ranked for academics in the region.

Advice for American kids: “Study hard so you can achieve your dreams.”

2 thoughts on “Meet Jackline from Kenya”