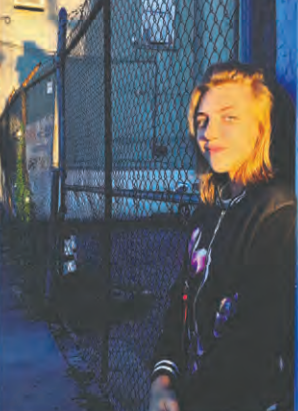 Izzy Weitzman: What made you decide to do IndyKids? How do you like it?

Gigi Kriegsmann: I decided to do IndyKids because I did a workshop through something called 826NYC. I also really love writing articles for IndyKids. I like that they look for opportunities to give to kids.

Izzy: What was your favorite article?

Gigi: The article that I most enjoyed writing was the one about Chicano Park. Chicano Park is a park in San Diego. The city tried to turn it into a parking lot, but the people who lived near there wouldn’t let it happen!

Gigi: If I could go anywhere in the world, I think I would go to Barcelona, mostly because of the amazing architecture, the amazing music, food and culture. I would also go see every single building by Antoni Gaudi because he rocks! But I would come back to New York soon because I love it here.

Izzy: Who is your favorite author? What have they written? What is their best book, in your opinion?

Gigi: I think my favorite author is Brian Selznick. My favorite is the “The Marvels,” because he captures such an amazing view of the book through his drawings and the fact that every picture makes up a factor of the story. It’s not like there are pictures in the book that you can blow by, you have to take each one into consideration and pay close attention.

Izzy: If you could only eat one thing for the rest of your life, what would it be? Why?

Gigi: Sushi, because there is no other food that has ever existed that even comes close to the incredible taste that sushi holds within itself.