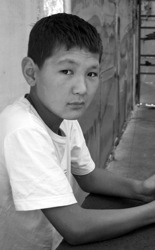 Career: Arnali wants to be a businessman when he grows up.

Favorite food: Plov, a traditional Uzbek dish, made with rice and small pieces of beef.

Family: Arnali has an older sister and an older brother. His father owns a shooting arcade where Arnali works during the summer. His mother works in commerce in Russia.

Peace be with you: Salam aleykum

Poverty: 40% of the population

Brief history: Kyrgyzstan was formally incorporated into Russia in 1876 and became independent in 1991