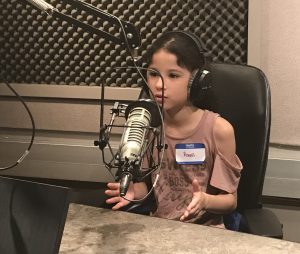 Why did you decide to become an IndyKids reporter?

Because it seemed like an interesting experience to become a journalist and be introduced to new topics that I haven’t heard about.

I’ve had a lot of fun experiences, and I’ve learnt a lot, especially during the editing process.

Anything that’s political, environmental and stories about people and community activists.

What is your favorite article you’ve worked on?

I learnt a lot from the article I wrote on gun violence in schools, since Parkland. It touched me. It was a lot of information that I didn’t know about until I researched it. This is reality, and it’s hurting people, so I decided to write that article because I want to put an end to it.

What did you learn from your interview with Democracy Now!’s Juan González?

I learnt to be more open-minded and listen so that I could ask follow-up questions. We talked about his activism in the Young Lords, and I learnt it’s important to speak your mind, because if you want to be an activist, you have to fight for rights.

Why is it important to be a journalist?

Do you want to be a journalist when you grow up?

I want to be a mechanical engineer when I grow up… But… my hobby is going to be journalism because I want to keep people informed and updated about what’s going on in the world.

Who is someone that you would like to interview?

I would also like to interview the executive editor of The New York Times.