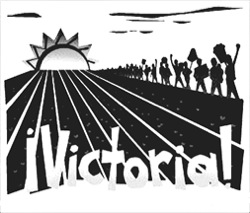 By LAUREN KARCHMER and AUDREY SASSON

On April 9, the Coalition of Immokalee Workers (CIW) won a huge victory when McDonald’s agreed to the demands of the tomato pickers.

Now McDonald’s will pay a penny more per pound of tomatoes each farmworker picks and develop rules to keep workers safe in the fields.

The CIW is a group of farmworkers living in southwest Florida. They are from Mexico, Haiti, Guatemala and other countries. They pick tomatoes for big companies like McDonald’s but get paid very little. Farmworkers are paid 40 cents per bucket of tomatoes they fill. They have to pick more than two tons of tomatoes everyday just to make enough to survive.

It’s a small amount of money for a big corporation like McDonald’s — which last year earned almost 7 billion dollars in profits — but just a penny more per pound of tomatoes nearly doubles the amount farmworkers earn each year.

“Today, with McDonald’s,” said Lucas Benitez of the CIW, “we have taken another major step toward a world where… farmworkers can enjoy a fair wage and humane working conditions in exchange for the hard and essential work we do every day.”

On April 13th, thousands of people traveled to the McDonald’s headquarters in Chicago to celebrate the victory with the CIW. Young people have been important in the effort to encourage McDonald’s to treat workers fairly. Said Gerardo Reyes-Chavez of the CIW, “We know that students have a lot of power because they are the main target of McDonald’s.”