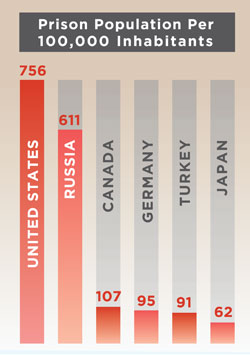 1 in every 100 adults in the United States is in prison, a far greater number than any other country in the world.

1790
First state penitentiary opened in Pennsylvania. The early prisons tried to make prisoners “penitent,” or sorry for their crimes

1980s
Politicians got “tough on crime.” The use of probation and parole decreased. More people were imprisoned for longer periods of time, which resulted in severe overcrowding.

1986
The Anti-Drug Abuse Act of 1986 created mandatory minimum sentences for having even small amounts of certain drugs.

Since 1990
Even though crime rates have gone down since 1990, more people are being imprisoned. More people are being put in prison, prison terms are being lengthened and more kinds of crimes are bringing prison sentences. Now over 50 percent of people in federal prison are there for drug crimes, not for violent crimes.

• It costs U.S. taxpayers an average of $24,000 a year to keep one person in prison
• From 1987 to 2007 the amount of money states spent on prisons increased by 127 percent, compared to 21 percent for colleges and universities

Statistics from: The Pew Center on the States, U.S. Senator Jim Webb, U.S. Department of Justice

Click here: TO READ LETTERS FROM KIDS about their family members who have been in prison