Live on the Scene at the Washington, DC March for Our Lives 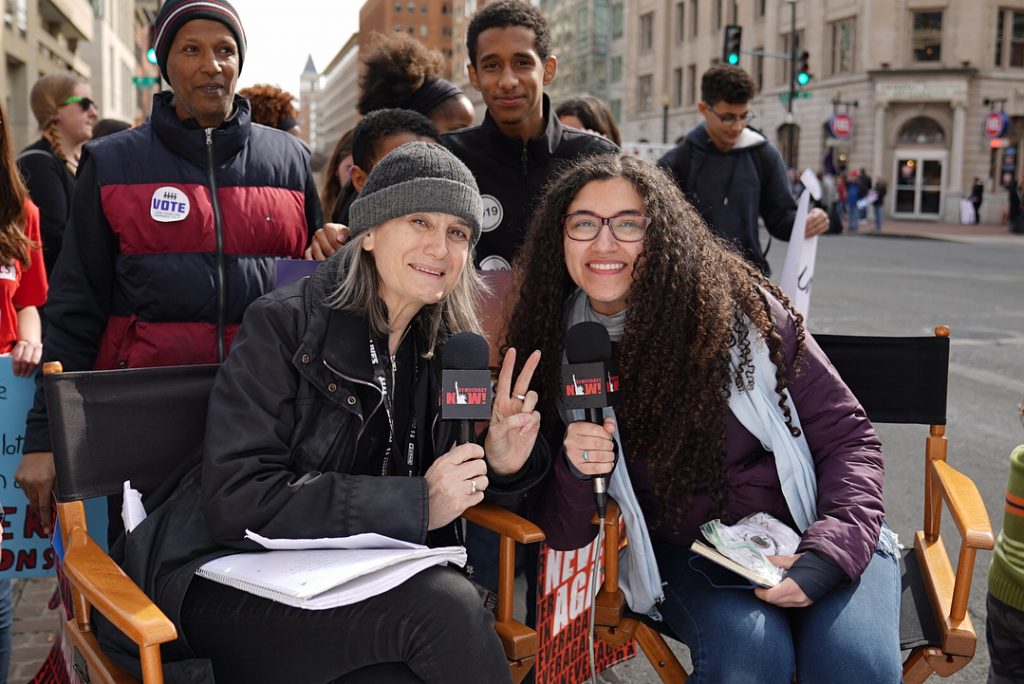 Amy Goodman of Democracy Now! (left) poses with Soledad Aguilar-Colon (right) at the March for Our Lives in Washington, DC.

On March 24, I attended the March for Our Lives rally in Washington, DC as the Youth Correspondent for Democracy Now!, a global news outlet. I walked around the march interviewing students, parents, and teachers from across the nation.  According to Digital Design & Imaging Service Inc (DDIS), approximately 200,000 people attended the march in DC. There were an estimated 800 simultaneous marches across the country that day.

As I walked through the crowd, I was surrounded by signs that read, “Am I next,” “Protect Kids, Not Guns (Don’t Shoot),” and “We may be kids, but we’re not kidding!” all referencing the many police shootings in black communities and their impact on the lives of children.   Many of the conversations I had with students, ranging from elementary school to college, expressed a similar concern – their school could be next.

The organizers behind the March For Our Lives want to bring awareness that gun violence is an intersectional issue that affects everyone. The more I spoke with the attendees, such as a teacher from Washington, DC and a Muslim student at Brooklyn College, another narrative that had not been given much attention started to emerge.  Gun violence has affected black and brown communities, too.

As survivors of the February 14 high school shooting in Parkland, Florida, Emma Gonzalez, David Hogg, Delaney Tarr, and Cameron Kasky commanded attention from students, parents, and teachers across the nation.  They picked up microphones and megaphone to encourage communities to put pressure on their government representatives to pass tougher gun laws, such as ending civilian access to high capacity magazines, raising the minimum age, and banning assault weapons from public use.

Intersectionality: The idea that a person’s experience in life is influenced by how different parts of their backgrounds connect with one another, like the crossroads at an intersection.

Civilian: A private citizen who is not a member of a police or military organization.

High capacity magazine:  The detachable part of a firearm that holds a high number of bullets.