In Flagstaff, Arizona, a collective called Outta Your Backpack (OYB) gives movie-making equipment to indigenous youth, and holds workshops teaching them how to film and edit their own movies.

“Native youth aren’t represented in media, yet they’re heavily influenced by it,” said Rachel Tso, an adult mentor, “[OYB] is a form of media justice — kids can create their own stories and tell them.” 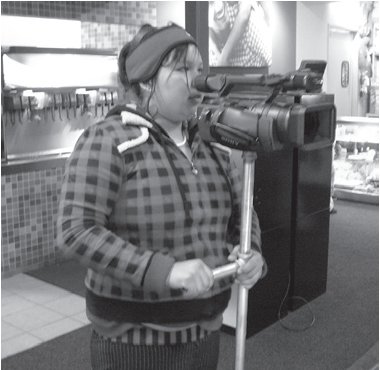 Camille Tso, 13, is training to become OYB’s youngest youth mentor. She will help teach kids how to film and edit, plan workshops and help the collective decide what to do with grant money. Camille started working with OYB at nine years old, when she acted in her first film called InnerVoices, about clear-cutting and a person who could hear trees. By the time she was 11, she knew how to edit her own movies.

Camille’s current project is a documentary about Black Mesa, Arizona (where Camille grew up) and the people who help the elders there herd their sheep, haul water, chop wood and prepare for the hard winters. The elders don’t get much help — in fact they’re being told they have to leave their home so that corporations can mine for coal.

Camille hopes her documentary will help families get support in the future. She interviewed helpers about how they’re going to take the knowledge from Black Mesa to other areas of their life.

“Not that many people know what’s going on in Black Mesa,” she said. “There are so many people all over the world who just think about taking, and they don’t think about who they’re taking from. For example, people don’t know where their energy comes from and who’s affected by it. The more we get the message out, the more aware people will be and the more they’ll change.”

Collective: A group of people who make decisions about an organization together, by consensus.

Clear-cutting: A logging practice where most of the trees in a forest area are cut down, usually by large corporations.

Black Mesa: A very rural area on the Navajo Reservation that is sacred to the Navajo (Dineh) and Hopi people.