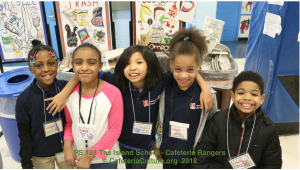 Though some, including U.S. President Donald Trump, might scoff at climate change, scientists predict it will cause catastrophic devastation to people and the planet in the not too distant future, if we don’t take significant actions to reduce it. Contributors to global warming include pollution from factories, cars, homes and airplanes, all of which burn fossil fuels and release CO2 (carbon dioxide) into the atmosphere. But there is another contributor to global warming that is often overlooked, and that’s the impact of waste. When garbage in landfills rots, it releases CO2  as well as methane, a greenhouse gas that’s 28 times more potent than carbon dioxide.

One organization trying to curb the impact of waste is Cafeteria Culture (CafCu), a New York City-based awareness spreading machine. It recruits kids to become “Rangers,” who oversee all recycling and sorting in their cafeterias. CafCu also has many programs to educate students and staff on the importance of “Zero Waste,” which aims to put an end to landfills and incinerators. Damien Otero, a Cafeteria Culture Ranger and third-grader at PS 188, says, “I like it because we’re helping the universe and we’re being responsible.” One of Cafeteria Culture’s biggest achievements was eradicating styrofoam trays from New York City public schools in 2015. Styrofoam is a durable plastic that scientists estimate takes 500 to 1 million years to break down, if at all. 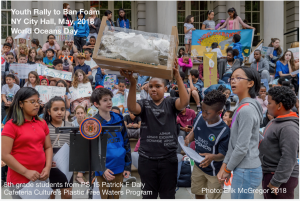 But landfill waste isn’t the only thing killing Mother Nature. A large amount of plastic waste that doesn’t end up in landfills ends up in waterways. Millions of tons of plastic end up in the oceans each year, poisoning the water and threatening the wildlife. This is why Debby Cohen, the executive director and founder of Cafeteria Culture, says that CafCu is currently producing a movie with fifth-graders “as they tackle one of the greatest environmental and health challenges of our times: microplastic pollution.”