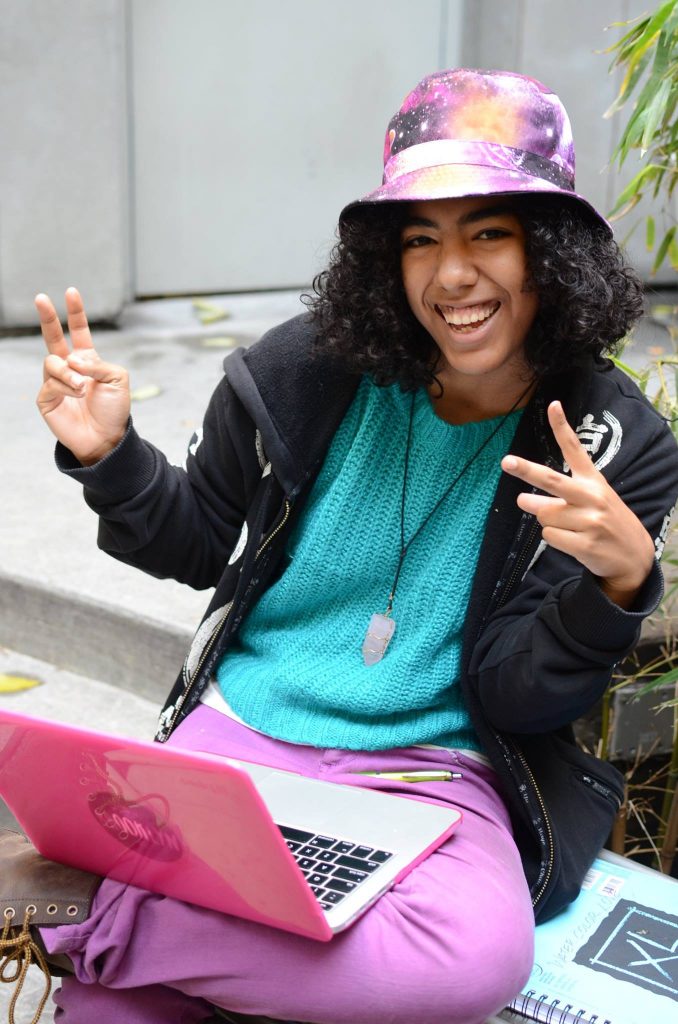 Marianne Nacanaynay: Congratulations on the release of your new book, Elegant Black Ladies! How has the reception been so far? Are there any poignant reviews you would like to share?

Jeana Lindo: Thank you! I’ve received a lot of positive feedback about this body of work. What I’ve had issue with, however, are some articles that have said that I was depicting the ‘day-to-day lives’ of the women in my photos. Such a notion is simply incorrect. Our daily lives do consist of looking great and laughing a lot, but we are also dealing with a lot of nonsense from people who don’t understand us. For some people, our magic is too much to handle and they find themselves at a loss for how to approach us. Some of these people don’t take the time to learn about us and they make assumptions that don’t reflect our character very well at all. Through my frustration with being misrepresented and misunderstood, I found inspiration to make images that depict black women in an honest way. I wanted to make space for these young women to create their own world to play in and just be.

Your photographs have been said to capture the ‘carefree black girl’ subversive archetype of black femininity. Do you feel that this accurately portrays your work? What other stereotypes and stigmas were you challenging when you put together the collection? Could you talk more about what inspired you?

I do feel that the essence of the ‘carefree black girl’ is channeled through this book. I was really challenging the ways that the media dehumanizes us; they paint us as aggressive or hyper sexual. Instead of constantly arguing or trying to seduce people like many black women are shown to be doing on television shows and in magazines, music videos and everything, I wanted to show black women doing the things that I’ve grown to know and love them for. I wanted to show them as the healers and bright lights that they are. Some of the pictures are about female friendship, love and unity. This work reflects the love that I have for each one of these ladies and the girls who can see themselves reflected in this book.

It hurts my heart to know that some people don’t consider black women when they’re talking about women. I needed to say, “We’re women, too.” I wanted to affirm our feminine qualities by portraying us as gentle, soft and beautiful. There is a misconception that black women don’t need any support because they’re so tough, but I believe that we have feelings just like everyone else. The black woman is precious and worthy of being protected.

Kodak photostock and Instagram filters have both been accused of being inherently racist in their treatment of dark skin tones. What is your opinion on the matter?

I know that Kodak photostock definitely has been racist in the sense that Kodak did not consider brown tones when creating their product until, as the story goes, confectionaries and furniture companies complained about its ability to pick up chocolate and furniture. To know that the camera and its film was not designed for me saddens but does not surprise me since black people didn’t exist until the 1400s, according to my American public school history books. Despite the contributions that artists of color have made to the technical and creative art of photography, I scarcely hear the names of any black photographers in mainstream dialogue, so I just have to assume that they’re not real and wouldn’t need film catered to them. All painfully true jokes aside, I am bothered by the way that Instagram filters lighten my skin, so I usually avoid them. Also, while I find that some cameras have made improvements, I hope that one day all cameras will be able to successfully autofocus on people with dark skin.

In an article on Buzzfeed, Syreeta McFadden describes her arrival at a process that she feels more accurately captures the full range of skin colors. Do you find yourself needing to retouch or process your photographs differently in order to achieve a better representation of dark skin tones than you would of, say, lighter skin tones, animals, landscapes or objects?

Yes, I usually open up the shadows in the image in Adobe Camera Raw in order to bring out the hair texture of my subjects. Sometimes I also need to color balance my images so that they can reflect the golden skin tone of my people.

In your studies as a photography student, have your mentors and professors been helpful in helping you to navigate issues surrounding race in photography, or did you have to turn to your peers and contemporaries?

I have only had two black professors in my three years of college. I feel that is a big issue in general and relates to the kind of feedback I can get about my work which often addresses the issue of race. A few of my professors have been enthusiastic about presenting a diverse group of artists for my class to learn about, but some of my professors admit they don’t know who Lorna Simpson is while they fawn over Thomas Struth. I have received some good suggestions from my professors for films and books to look into that might relate to my work like Through a Lens Darkly, for example. The school library is my favorite resource, but it still has ten Cindy Sherman (a white woman who did blackface in one of her projects) books and only three Gordon Parks books, which I had to put in a request for. I try to do my own research by asking older black photographers and fellow students in the Brooklyn art scene about their inspirations and I also go to museums when I can.

Do you have any advice for young, aspiring photographers who wish to capture a truer image and overall better representation of people of color?

Start at home. Reach out to your community. Think about the issues that they face. Do some research. My understanding of the history of the image of the black woman is what informed the work I made for this project. My understanding of the history of exclusion of people of color in all forms of media informs all the work I make today. I know that there is a need for more images of people of color smiling and moving about freely. I know that I’m tired of seeing our pain exploited.

It is most important for you to listen. Listen to the voice of the people you want to represent. Let them tell their story. You, the camera and pictures are just a medium for them to speak through. Let the work be about the people.