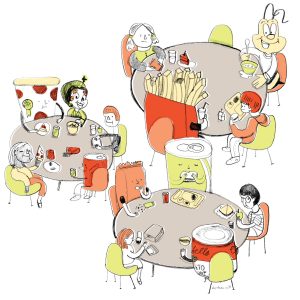 When we study nutrition in school, we learn about the healthy foods we should eat. So why are nearly one in three kids in the United States still overweight? Part of the reason is that fast food and junk food companies spend over $5 billion a year on advertisements targeting kids, and it works.

Children spend $20 billion per year of their own money and influence another $200-$500 billion in spending by adults in their lives, according to Professor Alex Molnar of Arizona State University. That means that even young kids’ pocket and allowance money is important to big corporations and they try to convince kids to give it to them.

More and more, especially since the 1990s, corporations are getting their message to kids while kids are in school. About 67 percent of public schools now have in-school advertising by fast food and junk food corporations, according to Arizona State University’s Commercialism in Education Research Unit.

Food companies say that these programs are a way of giving back to the community and supporting education. But the bottom line is that these companies can get bigger profits by reaching kids in school. “The school system is where you build brand loyalty,” John Alm, president and chief operating officer of Coca-Cola Enterprises, told the Atlanta Journal-Constitution in 2003.

Many school boards across the country are limiting or banning these types of commercials in school. For example, in 2004 the DeKalb County, Georgia School Board said that schools are not allowed to sell soft drinks, candy and other items during the school day.