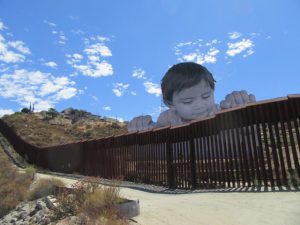 JR is one of the most influential street artists in the world, known for using his art as a medium to advocate for social justice. He began as a graffiti artist on the streets of Paris. One day he and his friends found a camera in a subway station. They began taking pictures of themselves and pasting them to the city walls.

Then, during the 2005 Paris riots, when second- and third-generation immigrant youth were protesting racism and economic inequality in France, JR saw one of his photos behind a burning car on the TV news. This inspired him to begin his first project, Portraits of a Generation, in which he took pictures of Parisian youth protesters and posted them around Paris. He wanted to use these images to challenge the passers-by to question the media’s representation of this generation. Eventually, he was invited to post his images on the sides of Paris City Hall.

Through his art, JR tries to get people to see we are all humans and neighbors, not “the other” to fear, attack or stereotype. This is what he tried to do with the conflict in Israel and Palestine. He took pictures of Israelis and Palestinians with the same jobs—actors, hairdressers, musicians—making funny faces. He then pasted those images next to each other on both sides of the security wall that divides Israel and Palestine, and in various Israeli and Palestinian cities, including the West Bank. Most residents could not tell which person was from which territory.

JR’s next project, Women Are Heroes, began in a favela in Brazil. He took pictures of local women and pasted them to the sides of buildings. The project now includes seven countries. In Kenya, the photos were printed on vinyl and posted on the tops of houses, effectively waterproofing those houses. His work proves that any good, unique idea can become a worldwide art movement.

JR, now 35, continues to advocate for social justice issues. Recently he pasted a picture of a baby peering over the the Mexico-U.S. border fence, in an attempt to continue to redefine how we think about borders and what connects or separates us.