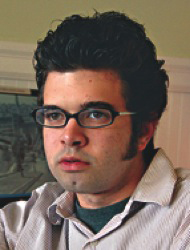 Journalist Josh Wolf was freed in April after seven and a half months in prison. He spent more time in jail than any journalist in U.S. history for the reason of protecting sources. Josh was jailed for refusing to turn over a video he took to a grand jury and for refusing to name the people in the video, which was of protesters at a 2005 demonstration in San Francisco.

Josh was released from jail after a compromise was reached. He agreed to answer two questions about what he saw at the protest and to put the video of the protest on his website for all to see. But he didn’t have to appear before a grand jury and give the names of people at the protest.

In 2006, the Society of Professional Journalists awarded Josh “Journalist of the Year” for “for upholding the principles of a free…press.” Many other organizations of journalists supported Josh because they believe it is important for journalists to be able to protect their sources.

After being released, Josh told Democracy Now! News, “A free press is not something that the government is very fond of. It’s time for us to realize how important it is for the free flow of information because news is what people don’t want you to know.”