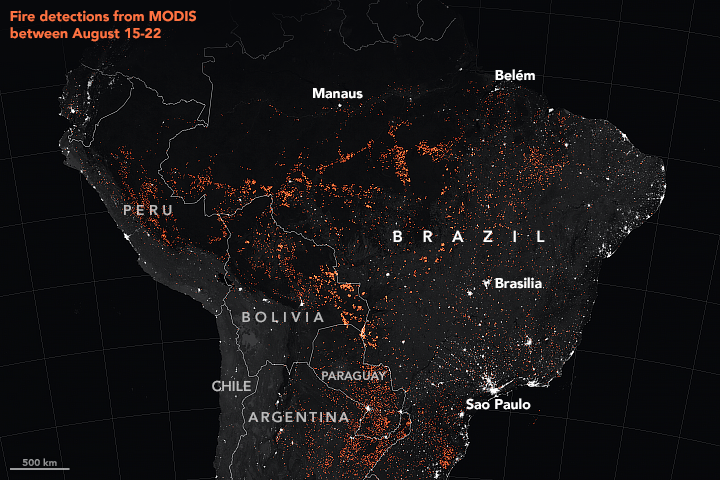 The smoke from the fires can be clearly seen. This smoke absorbs sunlight, not only preventing it from reaching the ground, but cooling the surface and heating the atmosphere. This process can suppress the formation of clouds.

The Amazon is burning. Brazil is facing not only a pandemic but an environmental disaster as well.

Brazil is a major exporter of animal feeds, leather, soy and beef. The demand for these products is causing farmers, ranchers and miners to start fires to clear the land for cattle ranching, soybean farming, and mining. Brazil is the largest beef exporter in the world, as well as the second-largest soybean producer. The Amazon also has areas which contain gold, aluminum and oil.

Major companies such as North Face, Vans and Timberland have stopped buying Brazil’s leather in fear of promoting the fires. The United Kingdom, in part, is also responsible for some of the fires. The U.K. demands a lot of goods from Brazil, such as soy, beef, coffee and iron. According to the Independent, 13.5% of the U.K.’s overseas carbon footprint is down to their imports from Brazil. Data from the World Wide Fund for Nature and Royal Society for the Protection of Birds shows that the U.K. demand for agricultural products relies on 800,000 hectares of land, much of which used to be in the Amazon. Greenpeace wrote, “The UK government must also put the Amazon and Indigenous rights first. That means stopping the trade talks currently underway with Brazil’s government, and ensuring any future deal has the Amazon and its people at its heart.”

Brazilian President Jair Bolsonaro and his administration have been accused by many environmentalists of encouraging ranchers and farmers to ignore the ban on starting fires in rainforests. President Bolsonaro was also said to have fired the head of the INPE and accused him of lying. According to CBS News, many farmers say that the media has exaggerated the fires, in order to defend themselves and to gain support for deforestation.

President Bolsonaro promised to stop the fires and, on July 9, banned agricultural and forest fires for 120 days, while an operation called Green Brazil was launched to stop the fires. In charge of this operation is Brazilian Vice President Hamilton Mourão. According to the Guardian, Mourão said to the Brazilian Senate, “We started combating these fires early and we are sure we will reduce this illicit activity by the second semester of the year.” But data shows that the Brazilian government failed to bring down the fires. Greenpeace campaigner Romul Batista said in an interview with the Independent that President Bolsonaro is using the coronavirus pandemic as a smokescreen to “enable deforestation, logging and mining in the Amazon.”

With the Brazilian government preoccupied with the pandemic, the deforestation fires may continue to spike, destroying even more of the rainforest. The fires may only stand to exacerbate the health crisis, as smoke from the fires fills the air and gets into peoples’ lungs, which could worsen the effects of COVID-19.