Indykids Podcast: “You are not helpless. You are not powerless” – How Everyday New Yorkers are Supporting and Providing Sanctuary for Immigrants 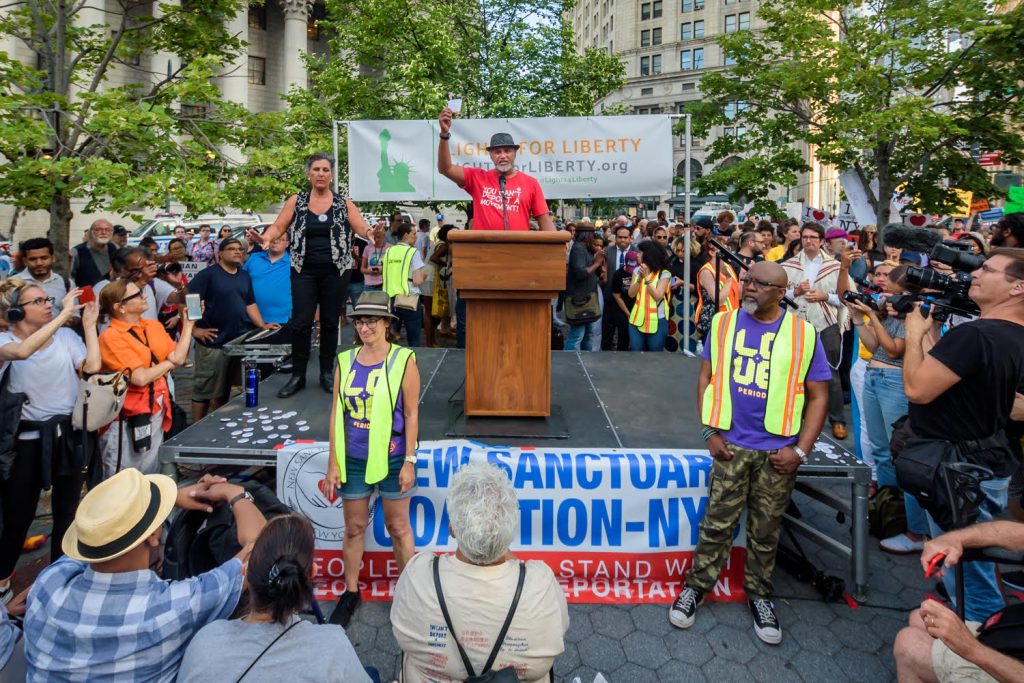 Ravi Ragbir, director of the New Sanctuary Coalition – Thousands of advocates, activists and community members flooded the streets at Foley Square, across from the Immigration and Customs Enforcement (ICE) New York Field Office on July 12, 2019 to join New Sanctuary Coalition and The New York Immigration Coalition at the Lights for Liberty vigil, deemed one of the largest solidarity actions in history with over 750 vigils across 5 continents. A light was lit for all those held in U.S. detention camps and to bring light to the darkness of the Trump administration’s horrific policies. (Photo by Erik McGregor)

IndyKids reporters Hudson and Aisha spoke with the prominent immigration activist and executive director of the New Sanctuary Coalition, Ravi Ragbir about the challenges facing immigrants in the United States today, as well as what everyday people are doing to support them. Ravi knows firsthand the impact that an uncertain immigration status has on one’s life, as he has been fighting his own deportation for the past 13 years.

Ravi came to the United States from Trinidad and Tobago in 1991, and soon became a lawful permanent resident as a green card holder. However, his immigration status was put in jeopardy when he was convicted of conspiracy to commit wire fraud, while working in a company that sold housing mortgages or loans. He was sentenced to 30 months in prison, and ordered to pay $350,001. He maintains he did not commit the crime, and his legal team is trying to vacate or overturn this conviction, arguing that there were fundamental errors in his conviction and sentencing. As a result of this, his immigration status was put in jeopardy because a conviction for a criminal offense, puts immigrants holding a U.S. visa or green card at risk of deportation.

Since 2006, Ravi has been fighting his deportation from inside and outside of immigration detention. He has also become a leading activist organizing fellow immigrants and supporting them emotionally, practically and legally, as well as pushing for humane immigration policies.

He was detained after his check-in with Immigration and Customs Enforcement (ICE) in January 2018, but a federal judge ordered his immediate release, saying his detention was “unnecessarily cruel.” Ravi’s lawyers argued he was targeted as a result of his advocacy work, including his open criticism of ICE.

In April 2019, a federal appeals court ruled that Ravi had made a “plausible” case that the “public expression of his criticism, and its prominence, played a significant role in the recent attempts to remove him” and that “the Government undertook the deportation to silence criticism of the responsible agency [ICE].” However, this type of retaliation is forbidden by the First Amendment of the U.S. Constitution, which protects the right to free speech.

Ravi works with the New Sanctuary Coalition, an organization led by and for immigrants which provides person-to-person support to many hundreds of immigrants — they call “friends,” not clients — facing detention and deportation. One of the New Sanctuary Coalition’s messages is that “You are not helpless. You are not powerless,” and they provide a number of opportunities for people to stand in solidarity with immigrant communities in their city.

Aisha and Hudson met Ravi at the New Sanctuary Coalition’s free legal clinic they run every Tuesday evening. This was the night before another of Ravi’s ICE check-ins. Aisha and Hudson produced and edited this podcast as part of IndyKids podcast Summer Camp.

Jeopardy: In danger of loss.

Vacate: To cancel a judgment or charge.

Conviction: A formal declaration that someone is guilty of a criminal offense.

First Amendment: Congress shall make no law respecting an establishment of religion, or prohibiting the free exercise thereof; or abridging the freedom of speech, or of the press; or the right of the people peaceably to assemble, and to petition the Government for a redress of grievances.

Plausible: An argument or statement seeming reasonable or probable.

Music in this episode comes from Blue Dot Sessions