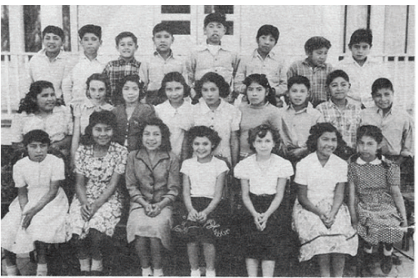 Bill Wight’s fifth-grade class photo from the Stewart Indian School in Nevada. Native American children at boarding schools were forced to cut their hair in order to receive rations. They were often punished for speaking their language and practicing their religion. /Bill Wright

In 1945, at the age of 6, Bill Wright, a Patwin Indian, was sent to Stewart Indian School in Nevada. He was given a name that was different from the one chosen for him at birth and forced to assimilate to the American school system and lifestyle. He told NPR that he was forced to shave his head and was bathed in kerosene. When Bill Wright returned from school he did not understand the language his grandmother was speaking and she did not recognize his white name.