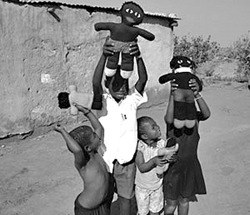 South African children at play with handmade dolls. A dollmaking project has produced 8,000 such dolls, which are sent to children whose families are affected by HIV.

KwaZulu Natal (KZN) is a province of South Africa where one out of every five children has lost one or both parents to the AIDS epidemic. AIDS, or Acquired Immune Deficiency Syndrome, is caused by the Human Immunodeficiency Virus (HIV), and it makes a person’s body unable to fight off infections. There is no cure yet for AIDS.

Medical advances have allowed people with HIV in rich countries to be treated and to live longer lives. But, according to the New York Times, these treatments are still not available to 70 percent of Africans who are infected. Drug companies in the United States and Europe control the manufacture and sale of AIDS medicines. They keep prices of medicines high so that they can make a profit.

In KwaZulu Natal the majority of people infected with HIV are mothers. How can these children cope with losing a parent? One way is by playing. The Uthando doll-making project has sent 8,000 homemade dolls to children in KZN, two-thirds of whom live in poverty. In many cases, a doll gives a child who has never had a toy something to hold on to. The project also connects children to medical services fighting AIDS, which are very hard to access.

“For doll makers around the world it is a chance for the givers to express themselves in a human way and learn about HIV/AIDS,” said Agnes Johnson of the Uthando Project. Said one KZN father, “The dolls are like shaking hands with the world.” 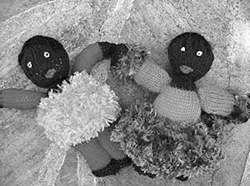