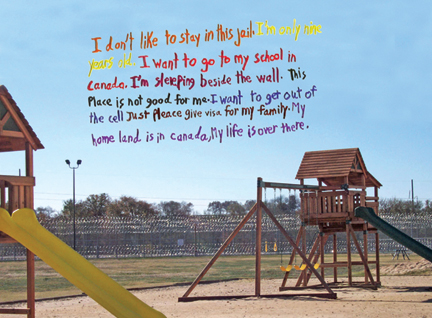 Nine-year-old Canadian Kevin Yourdkhani wrote a letter to the prime minister of Canada asking for a visa for his family. They were held for more than a month under prison-like conditions at this immigration detention center in Texas. Photo: WOMEN’S COMMISSION/MICHELLE BRANÉ; HANDWRITING: KEVIN YOURDKHANI

There is a place in Texas where over 200 children are being detained by U.S. Immigration and Customs Enforcement (ICE) because they do not have proper documents to be in the United States. The place is called the T. Don Hutto Residential Center, but, according to a report by two non-profit organizations, it feels like a prison.

Most children at the Hutto center are under age 12. Some families with young children have been in this kind of prison for up to two years during their immigration court hearings. Most people at Hutto are from Central or South America, but there are also people from other countries including Greece, Haiti, Iraq and Romania.

The Lutheran Immigration and Refugee Service (LIRS) and the Women’s Commission for Refugee Rights say families are being held in a prison-like setting behind razor wire, with overly harsh discipline and inadequate medical care.

“As a country that supports family values, we should not be treating immigrant families who have not committed a crime like criminals, particularly children,” said LIRS president Ralston H. Deffenbaugh.

Before 2001, the U.S. imprisoned immigrant families for only a short time and then released them while they had to attend immigration court hearings. But ICE says that most immigrants who were released did not come back for their immigration hearings. ICE is thinking about having more programs where immigrants are not detained, but instead wear radio ankle bracelets to track where they are.

What do you think? Should immigrants be detained or wear radio ankle bracelets when they don’t have proper immigration documents?

ONE CHILD’S PLEA FOR HELP

Canadian citizen Kevin Yourdkhani, 9, and his parents were traveling to Canada from Iran when their airplane made an emergency stop in Puerto Rico. Kevin’s parents are Iranian citizens applying for asylum in Canada because they fear going back to Iran.

They were detained at the Hutto Center in Taylor, Texas for nearly six weeks. While they were detained, Kevin wrote a letter to the prime minister of Canada asking for help. The letter was published in the Canadian newspaper, the Globe and Mail, and the story of Kevin and his family made news headlines in Canada.

The Canadian government gave the family a temporary resident permit to stay in Canada while their asylum application is being reviewed. Kevin said of his first night back in Canada, “I was sleeping like I was in heaven.”

“This man [who works at the facility] calls us ‘dirty undocumented’ or ‘ignorant people.’ This really hurts me. … He laughed and said something I didn’t understand. I tried to just walk away but he made me feel so bad that I couldn’t stand it and started to cry.” – Christina, a 14-year-old girl who was detained for two years, in a letter to the Women’s Commission for Refugee Rights

SOURCE: THE REPORT LOCKING UP FAMILY VALUES: THE DETENTION OF IMMIGRANT FAMILIES