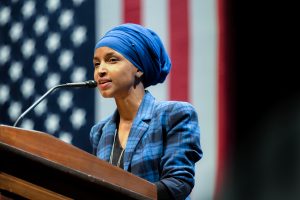 Ilhan Omar’s journey to politics was not very easy. Her family fled the civil war in Somalia and went to a refugee camp in Kenya before finally migrating to the United States.

Omar wants to rebel against the politics of division, give immigrants hope and inspire people.

The most important thing you should know about Ilhan Omar is she is the first Somali-American Muslim woman elected to Congress.

Being Muslim has made her journey into politics rougher than others, especially at this time of Islamophobic politics from President Trump. Even wearing a headscarf, known as a hijab, wasn’t allowed until Democrats moved to lift the ban on religious headwear in Congress. In response to conservative pastor E.W. Jackson’s remarks on lifting the ban that, “The floor of Congress is now going to look like an Islamic republic,” Omar tweeted, “Well sir, the floor of Congress is going to look like America… And you’re gonna have to just deal.”

Rashida Tlaib is one of the first Muslim women to be elected to Congress. Rashida Tlaib hopes to advocate for the diverse communities in this country and take on what she refers to as the “bully,” Donald Trump. Tlaib is representing Michigan’s 13th Congressional District, which is a diverse district with predominantly white, black and Hispanic residents. Tlaib says, “I will uplift you in so many ways, not only through service, but fighting back against every single oppressive, racist structure that needs to be dismantled, because you deserve better.”