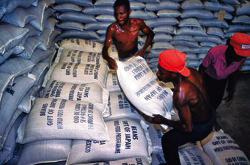 As food prices skyrocket, more people around the world are going hungry. The United Nations provided some food supplies to countries in need. Photo: United Nations

Unable to afford the food they need, hungry people in more than 30 countries rioted in recent months. Food prices have increased by as much as 83 percent since 2005, according to the World Bank. Many of the poorest people depend on wheat, soy, corn and rice for survival.

There is more than enough food to feed everyone in the world — enough to make most of us fat. The problem is too many people don’t have enough money to buy the food. Large amounts of food are thrown away because people can’t afford to buy it.

1 BILLION: Number of people who live on less than $1 per day

18,000: Number of kids who die from hunger-related causes every day

1 thought on “Hunger and Riots as Food Prices Soar”