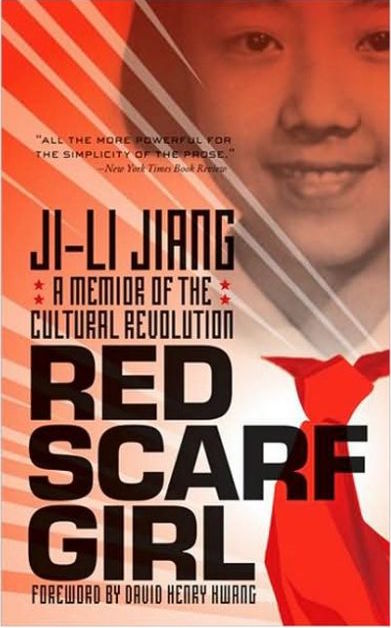 First published in 1998 by HarperCollins, Red Scarf Girl is a historical memoir by Ji-Li Jiang about her childhood during the Cultural Revolution in China.

Red Scarf Girl by Ji-Li Jiang is a memoir that takes place during the Cultural Revolution in China. It is 1966, and the changes in China are difficult for everyone. Ji-Li is a scholarly 12-year-old girl who lives with her parents, grandmother and two siblings. Chairman Mao, the leader of China, begins a program to reform Chinese customs and cultures. He tasks teenage Red Guards to find and destroy “The Four Olds”—old customs, habits, cultures and ideas.

Ji-Li, whose family has “bad status” because her grandfather was a landlord, is prevented from joining school organizations, defamed by peers and the Red Guard kidnaps her father. Students are no longer taught history, literature or anything deemed “Western.” Ji-Li battles personal conflicts as neighbors are harassed by the Red Guard and her own family is split apart.

Many of Ji-Li’s dreams are put on hold as the Red Guard wreak havoc on citizens: “Everyone could identify the sounds of a search, and we had grown experts at locating them in the neighborhood…. the adults I knew grew more and more tense.” The neighborhood is engulfed in fear; life becomes unstable and unpredictable.

Red Scarf Girl helped me understand the enormous impact of the Cultural Revolution on everyone in China and how those changes still affect people today. Read this book if you are interested in reading about political turmoil and how it affects teenager’s lives.