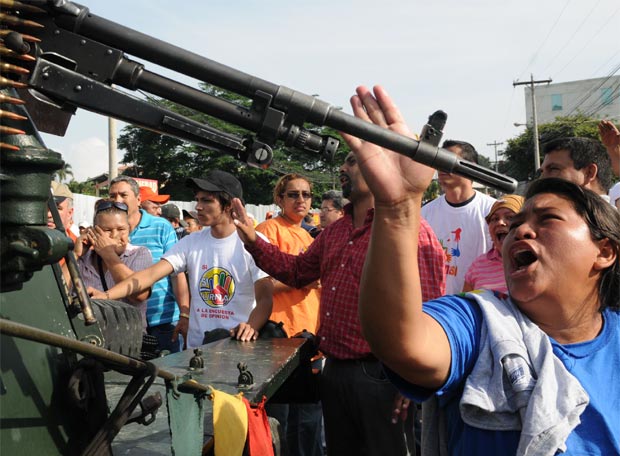 People in Honduras protest the removal of President Manuel Zelaya by a military coup. Photo: INDYBAY.ORG

By Matthew Block and Amanda Vender

The President of Honduras, a country in Central America, was taken from his home in the middle of the night by the Honduran military and flown to neighboring Costa Rica on June 28. President Manuel Zelaya was elected in 2005 to serve a term of four years, but was kicked out six months before completing his term.

Opponents of Zelaya in Honduras, including the interim president, Roberto Micheletti, and the country’s elite business people, say that Zelaya wanted to illegally change the constitution. Supporters say that Zalaya made reforms that are good for poor people, such as raising the minimum wage and giving more money to elementary education. “He isn’t a socialist or a revolutionary, but these reforms, which didn’t harm the oligarchy (the few people in charge) at all, have been enough for them to attack him furiously,” said Rafael Alegría of the group Vía Campesina (“Campesino Way”), to the Mexican daily La Jornada.

Large protests took place for months against the military coup (overthrow). Tens of thousands of Honduran teachers went on strike refusing to work until President Zelaya was restored. Other countries in Latin America and around the world, including the United States, immediately spoke out against the coup. President Obama said, “We believe that the coup was not legal and that President Zelaya remains the president of Honduras, the democratically elected president there.”

While the United States cut off $30 million in military aid to Honduras, it has been slow to officially recognize what happened in Honduras on June 28 a military coup. This would force Obama to cut off millions more in aid to Honduras.