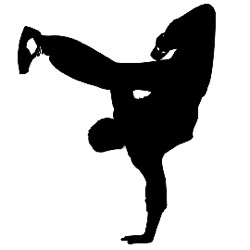 Did you know that hip hop started in New York City?

In the 1940s, a city planner in New York named Robert Moses demolished a section of the South Bronx. People living there who could afford to move to the suburbs fled to Westchester and Long Island, but the poor, immigrant communities were left with very few places to go.

By the 1960s, those who were still living in the South Bronx began taking over the torn down buildings and abandoned lots – “tagging,” or putting their mark, on them. People started using these spaces for dancing, and, by the late 1970s, MCs were rapping over the dance beats and releasing records.

Often, rappers and dancers would compete in “battles,” passing raps or dances back and forth, channeling their aggression in a healthy way. If you listen to hip hop now, you’re not alone. Hip hop is popular all over the world. In Mongolia, Haiti and the Philippines, hip hop culture includes freestyle break dancing and rap-rock remix. People in El Salvador and Honduras listen to reggaeton.

In Ecuador and Colombia, there is capoeira  – a form of martial arts that incorporates live drumming. In India and Pakistan, people listen to bhangra, a fusion of Punjabi singing and traditional instruments. Chinese hip hop emerged in Hong Kong, spread to Taiwan and only recently reached the mainland. There, Chinese instruments are fused with hip hop as we know it.

At Flushing International High School in Queens, NY students learned about hip hop history – the days when “the high was creativity rather than drugs,” said music teacher Beth Mabon-Grass. Students also wrote their own raps. Can you write one?

Jamie C., Jamie A, Qiong Qiong, Brandy and Dan, from China and Korea:

We were walking on the street

They were staring face to the feet

Making their own territorial map

Don’t try to guess my mind

Our heart is dark as it is blind

Move your freaking eyes away

Don’t waste time of your day

Luis Angel and Paolo, from Colombia and the Dominican Republic:

No notamos que ya es nuestra

In English, that means:

We think we live in peace and

We don’t notice that it’s our last agony

Innocent people dying all around