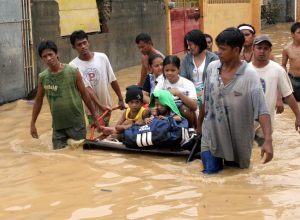 Residents of Manila, Philippines use a raft to rescue children from floods. Photo By JASON GUITERREZ/IRIN

Unusually severe storms in southern India and the Philippines, in September and October caused massive flooding that killed more than 1,200 people. Millions were forced to evacuate their homes, and hundreds of thousands found relief in emergency shelters. These disasters wiped out food crops and raised the possibility of severe food shortages not only in India and the Philippines but also in Vietnam, Sri Lanka and Laos.

Severe storms create all sorts of problems after the rain and wind end. Overflowing rivers and canals can contaminate drinking and bathing water with sewage, increasing the spread of diseases, especially when people are crowded into temporary housing. Raja Angamutthu, a farmer in a heavily flooded district of Andra Pradesh, India told Inter Press Service, “For almost one full day, we were desperate, wet and hungry….Our house, farmland, utensils, everything was floating in a watery grave while we looked on helplessly!” A waiter in the Philippines, Diverson Bloso, Jr., told a reporter from The New York Times, “It was terrifying to see the water rising, especially because there were live electrical wires around us. There were trash and rats and cockroaches all around us.”

Were these floods caused by climate change? Weather extremes are always a possibility, so it’s impossible to blame an individual storm on climate change. However, scientists agree that climate change will probably cause more frequent severe storms, and recent evidence shows that severe storms are occurring more often.