Group Goes to Court to Seek MORE MONEY for Schools 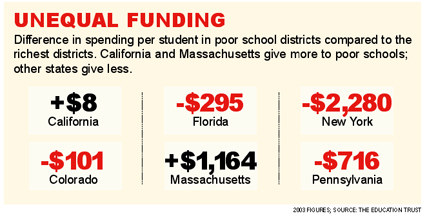 We all know that public school is free, but ever think about who pays for stuff like teachers, books and desks? Most money comes from the state through taxes grown-ups pay.

On average, around the country we spend about $900 less per student each year in the school districts with more poor and minority students than we do in schools with more wealthy and white students.

New York City has 1.1 million students, making it the largest school district in the country. Yet, it receives less money per student compared to other cities in New York State.

In 1993 the Campaign for Fiscal Equity, CFE, (fiscal means money, and equity means fairness) launched a lawsuit against the state of New York demanding more money for schools. In 2004, the Supreme Court of New York ordered the state to give New York City public schools an additional $11.3 billion.

Governor George Pataki decided to appeal the bill to prevent it from taking effect. Why? Pataki says that the additional money will make the state go broke. However, according to the CFE, the state already has $4 billion more than it needs to give to public education. The CFE says the additional money can be used to lower class sizes, create new libraries, buy computers and create a safe and healthy learning environment.

On October 10, lawyers for the Campaign for Fiscal Equity and the State of New York will present their oral arguments to the New York State Court of Appeals in Albany. While the legal battle continues, people like us can stay informed and contact our state representatives to let them know what we think about funding for our schools.

INDYKIDS’ INTERVIEW WITH THE CAMPAIGN FOR FISCAL EQUITY

Since 1993 the Campaign for Fiscal Equity has been working to ensure that students in New York City and throughout the state have enough resources and the opportunity for a good basic education. Stacy Feldman is director of communications with CFE.

Absolutely! The state of New York is under a court order to provide New York City schools at least $4.7 billion. As a matter of law, that money must be delivered to schools, and CFE is confident that it’s going to happen in 2007.

How will that happen? What is CFE doing?

First, we’re working very hard to get the highest court in New York state to issue a powerful order that would force the governor and the legislature to add those dollars. The order is expected in 2007. Second, New York state will soon have a new governor. It may be Eliot Spitzer, who has said that he would solve the lawsuit. Third, CFE has already drafted a bill that would meet the court order, and it’s sitting in Albany right now. We are going to be working hard this year to make sure it gets passed.

Is too little money for education a problem in other states too?

Yes. What’s going on in New York can be seen in school districts in almost every state. Across the nation, you’ll see the same unfair distribution of resources that deprives poor and minority children of the dollars they need to succeed.

Is anyone doing anything about that?

Thankfully, there are groups similar to CFE all over the country that are standing up for children and filing lawsuits against their state governments. In fact, lawsuits have been brought in 29 states, and plaintiffs* have prevailed in over three-quarters of them.

What can kids do to help?

Children are often the best advocates for their schools. I urge you to let lawmakers know that you want and deserve your CFE dollars. You can do so by logging onto www.ourkidscantwait.org and sending letters to elected officials through the site. There are also opportunities to get involved directly with CFE. E-mail sfeldman@cfequity.org to find out more.

*PLAINTIFF: A person or group that raises a complaint in court.