Going Beyond the Bottle

Water makes up nearly two-thirds of a person’s body. Everyone needs it to live. Most of us in the United States don’t have to worry about getting enough clean water because it is purified and provided through a government-owned community water system. All around the world, global corporations are earning large profits by selling water to people while hurting the environment. 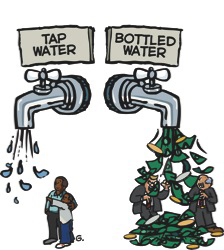 In spite of images of snow-capped mountains on its label, Pepsi’s Aquafina brand water really comes from the tap. In July Pepsi admitted this fact and agreed to put “Public Water Source” on the Aquafina label. In June the mayor of San Francisco banned city spending on bottled water. This is all part of a growing campaign to limit the power of bottled water companies and to protect public sources of water.

In some places of the world, these same bottled water corporations take so much water that they put the local water supply and environment in danger. In Michigan local residents challenged Nestle in court because they were concerned that the company was taking so much water that it was damaging the environment. In India Coca-Cola leaves little water for the local farmers. In addition, in October the state government in Kerala, India, gave notice that it may file criminal charges against Coca-Cola for polluting the groundwater and making it unfit to drink.

While battles over who can use water take place in the courts, ordinary people, including kids, are involved in the “Think Outside the Bottle” campaign. As part of the campaign, 11-year-old Nicholas Grech of Novato, California wrote to the chief executive of Coca-Cola, “I wish that Coca-Cola Company would stop taking the water out of the ground in India… They have millions of very poor people who depend on that water to live.”

As companies that make money from selling water become more powerful, they are able to reduce government money that supplies public water systems. This means that corporations rather than governments control and profit from water. The World Bank, which offers loans to poor countries, often requires that countries privatize their water systems in order to get a loan.

Says Patti Lynn of the “Think Outside the Bottle” campaign, “There is no substitute for public water. Water is a human right, not a privilege.”

THE CORPORATIONS BEHIND BOTTLED WATER

PAYING MORE FOR THE SAME THING

1 bottle of water like this one (20 ounces) sells for 1 dollar. But look how many glasses of tap water you could get for only 1 cent!

That’s 51 pint glasses of tap water for just 1 cent. Don’t drink ’em all at once!

BOTTLED OR TAP — WHICH IS SAFER?

The tap water from your faucet is tested for safety by the Environmental Protection Agency (EPA). Bottled water is tested by a totally different agency, the Food and Drug Administration (FDA). Even though bottled water companies may suggest that their products are safer than tap water, the EPA’s safety standards are generally much stricter than the FDA’s.

For example, bottled water is not tested for several microbes (organisms that can make you sick if you ingest them), but tap water is. The EPA is also required by law to monitor the levels of dozens of contaminants, or chemicals that can make you sick, in tap water. The FDA does not test bottled water for several contaminants, including the harmful mineral asbestos and the cancer-causing chemical benzene.

Kids just like you are writing letters to the bosses of bottled water companies. Find out how in the box at right (“What You Can Do”).

WHAT YOU CAN DO

•    Learn more about water and educate your friends. For more information, visit www.stopcorporateabuse.org.

•    Don’t buy bottled waters and drinks. Drink from the water fountain or carry a refillable bottle.

•    If you do have to buy bottled water, then make sure to recycle the plastic container.

•    Write to the chief executives of bottled water corporations to tell them to be honest about the source of their water and to not pollute the environment:

•    Hold a tap water challenge. Challenge your classmates to see if they can tell the difference between tap water and bottled water.