Getting Wild with the Leatherback Turtle 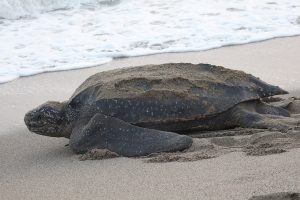 Leatherback sea turtles are one of the world’s largest pelagic turtles found in the open ocean. The thousands of tiny bone plates on its back gives it its leathery look. They are an endangered and vulnerable species due to coastal habitat loss, commercial fishing, egg poaching and human activity. The World Wildlife Fund (WWF) set up marine protected areas to ensure that they have a safe place to roam freely. There are an estimated 100,000 nesting females left in the world, compared to 115,000 in 1980. They’re fundamental in the ocean’s ecosystem because they eat large numbers of jellyfish, which helps keep jellyfish populations at bay. They also eat fish, mollusks, squid and sea urchins.

Pelagic – meaning they swim in the pelagic zone, which is neither close to the bottom nor near the shore. Ecosystem – a community of living organisms interacting as a system.