From Home to Landfill in Minutes

The United States continues to be the most wasteful nation on earth, and things are getting worse every year. Since 1960, the amount of trash the average person throws away has nearly doubled, according to the Environmental Protection Agency (EPA).

Most of our household trash is paper, with each person using about one 100-foot-tall Douglas fir tree in paper and wood products per year according to the EPA. Food scraps make up another big chunk of garbage. In fact, more than a quarter of the edible food bought for consumption ends up in the trash.

When we buy things, we start discarding them immediately by removing and throwing away the packaging. Unnecessary packaging, however, is only a fraction of the total waste. The system that produces our goods is so inefficient that after six months, only about one percent of everything used up is still around for us to enjoy.

Where does all the trash go? According to the EPA, 54 percent of common household waste goes to landfills. Since 1990, the total amount of household garbage pumped into landfills has dropped from 142.3 million to 137.2 million tons per year. Some researchers attribute this decrease to recycling and burning more trash to produce energy, which also creates pollution.

“The system that produces our goods is so inefficient that after six months, only about one percent of everything used up is still around for us to enjoy.” 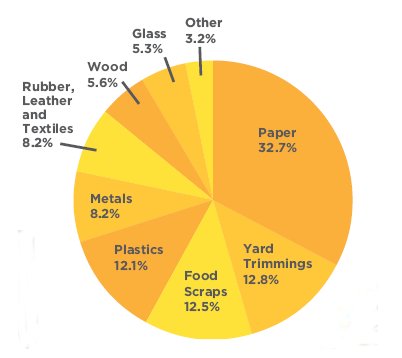