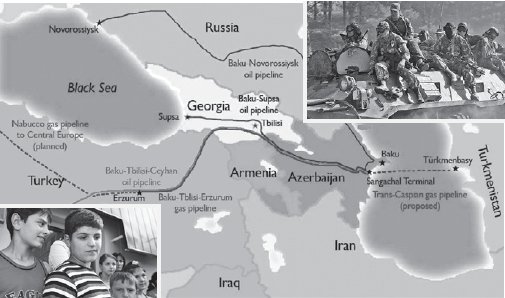 The United States helped build an oil pipeline (shown on map) through Georgia, a country where a war took place in August. The photos show a Russian tank (top right) and kids in Eredvi, a heavily damaged village. Photos: Antonis Shen; Map by Thomas Blomberg

In August, fighting broke out in Georgia, a country that spans Eastern Europe and Southwestern Asia. More than 100,000 people had to leave their homes due to the conflict, according to the United Nations.

The recent fighting began when the Georgian government, an ally of the United States, tried to take back a breakaway province, called South Ossetia, by force. South Ossetia is an ally of Russia. More than half of the people in South Ossetia are Russian citizens. Then Russia invaded Georgia to stop Georgia from invading South Ossetia.

President Bush said that Russia was bullying Georgia. “Bullying and intimidation are not acceptable ways to conduct foreign policy in the twenty-first century,” he said. Russia said that it was only defending its citizens in South Ossetia who were attacked.

In a deal that was arranged by France, Russia said it would pull back its troops to where they were before. As the Russian troops withdrew, refugees started returning home.

While the fighting has stopped, there will likely be ongoing tensions. Most news on the conflict does not mention that Georgia is in a region with large amounts of oil and natural gas resources. Russia and the United States both want to control these natural resources.

The U.S. government helped plan the construction of an oil pipeline through Georgia that opened in 2005. The United States has also provided millions of dollars in funding to the Georgian government for military operations.

Michael Klare, defense analyst and professor at Hampshire College, explained on the news program Democracy Now!: “By building these [oil] pipelines, the U.S. is trying to undercut Russia’s political and economic power in Europe.
That’s what this is about. ”