FBI Tries to Take Bite Out of Apple 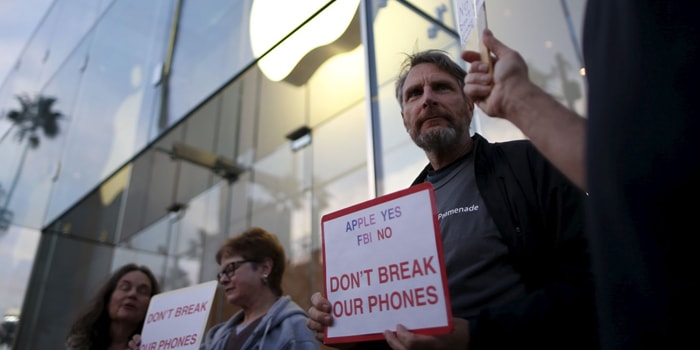 Earlier this year, protesters gathered outside Apple stores across the country to rally against the FBI’s attempts to hack into iPhones. PHOTO: iPhoneDigital/Flickr

The U.S. Senate is writing a bill that could force technology companies to hack encrypted devices in response to a court order.

This bill came about after Syed Rizwan Farook and his wife Tashfeen Malik opened fire at the Inland Regional Center in San Bernardino, CA, on December 2, 2015, fatally shooting 14 people and injuring 21 others. The couple was ultimately killed in a shootout, but their iPhone 5c was recovered. The government obtained a subpoena to push Apple to unlock the device, which the tech giant appealed.

The FBI will continue to fight Apple to unlock its iPhones despite finding an alternative way to unlock the phone in the San Bernardino case.

This case is just one of about a dozen in which the government has requested Apple’s help since September 2015. Each pits the issues of constitutional rights and national security against each other.

“It’s very worrisome. The government has gone too far,” said Eric Freedman, professor of constitutional law at Hofstra University, referring to the government trying to make Apple hack the devices for them. “The problem with the government is there is no law that permits them to do this.”

“I think Apple is being very selfish in not helping the government in this case against terrorism,” Manuel Gomez, president of MG Securities and a former FBI special agent, said. “[I]t’s about being able to detect and deter future attacks. It’s about keeping people safe.”

An Apple lawyer said while the company is disappointed, it is not surprised the government has decided to continue pursuing the issue. And in a letter to customers, the tech giant claims any order to create a backdoor in its operating systems “would undermine the very freedom and liberty our government is meant to protect.”

Encrypted: Describes information or data that has been converted into a code to prevent unauthorized access.
Subpoena: A document ordering a person to come to court.
Deter: Prevent from happening.
Undermine: Threaten, damage or weaken.