Expressions of Solidarity with Gaza Residents 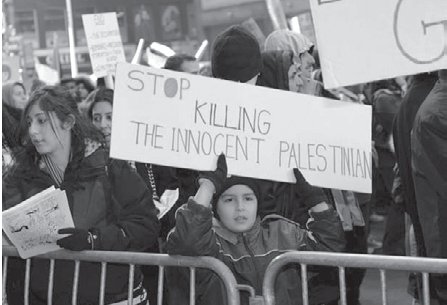 Thousands of people around the world have demonstrated against Israel’s attacks on Gaza. Above, a kid in New York City expresses solidarity with Palestinians on January 3. Photo: NYC Indymedia

The day after Israel launched its attack on Gaza, people around the world took to the streets in protest, and protests have continued since.

In New York City, over 3,000 people gathered at Rockefeller Center on December 28. The majority were Palestinians or Palestinian-Americans. Hundreds of children came with their families, and teenagers came with classmates or youth groups. Four seven-year-old Palestinian girls held a large Palestinian flag, chanting “Free Palestine!”

Many at the demonstration had friends or family members wounded or killed in the attacks. “It’s not justice. They don’t have food or shelter. Whenever we donate they don’t pass it on. There’s no food or medicine or water, and they won’t let them pass,” said Huda Shalabi, 11, of Paterson, NJ, referring to the Israeli blockade on basic goods entering Gaza.