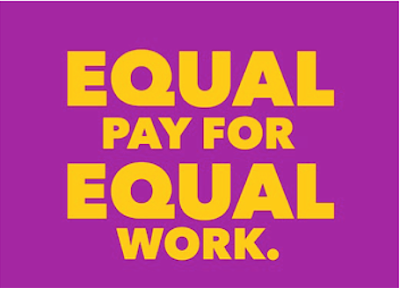 Equal Pay Day started in 1996 by the National Committee on Pay Equity (NCPE). It is a day that highlights the issue of unequal pay between men and women. This issue is called the gender pay gap because of the difference between what men get paid and what women get paid. In order for women to make the same amount of money that men do, women have to work an extra four months. That’s why Equal Pay Day falls on April 2 each year. This date was based on data which showed that women earn 80 cents for every dollar that men earn; however, a 2018 report by the Institute for Women’s Policy Research (IWPR), which looked at women’s earnings in comparison to men across a 15-year period, found that women made just 49 cents for every dollar men made.

On June 10, 1963, the Equal Pay Act was signed into law, mandating that men and women get paid the same amount for the same work. Yet, to this day, men still get paid more than women do for the same work. This may happen because men make assumptions about women, such as women aren’t “bread winners” or the main person who earns money to support the family, so they don’t need to get paid as much.  However, a 2018 report from the National Domestic Workers Alliance (NDWA) and IWPR called “The Status of Black Women” said that despite the fact that Black women have to work an addition seven months to make the equivalent of what white men did from the previous year, they are the sole providers in over 80% of Black households. Low minimum wages, inequality in healthcare, and caregiving responsibilities contribute to the gap in pay.

The IWPRh says that strengthening enforcement of equal employment opportunity policies and Title IX in education is also crucial to narrowing the gender wage gap.Title IX – Title IX of the Education Amendments Act of 1972 is a federal law that states: “No person in the United States shall, on the basis of sex, be excluded from participation in, be denied the benefits of, or be subjected to discrimination under any education program or activity receiving Federal financial assistance.” (see the center pages for more info)