When some of the world’s biggest banks nearly went broke in September, the U.S. government stepped in and provided more than $700 billion to help them stay in business.

But for most people struggling to pay back home loans offered by those same banks, no help is coming from the government. 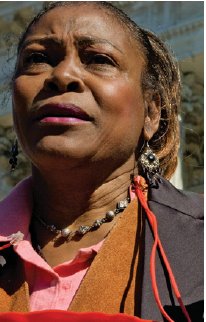 Jocelyne Voltaire, an immigrant from Haiti and mother of four, has lived in the same house in Queens, New York, for 20 years. She took out a loan on her home to help her son pay for college. She worked two jobs in order to make ends meet and support her young children.

“I’ve been working all my life,” Voltaire told the news program Democracy Now! “[I] spend all my life doing two jobs…. I only have two hours sleep or an hour and a half sleep, going to another job at night.

But Voltaire became unable to make the higher payments to the bank required under the new home loan. The bank she borrowed from put her home in foreclosure (took it away because she couldn’t keep up with payments). Just weeks later, Voltaire’s son, a marine, died overseas.

Voltaire’s home was scheduled to be sold to someone else in October. But antiwar activists from the organization CODEPINK (a peace and social justice movement started by women) heard Voltaire’s story and helped raise $30,000 in donations. The money allowed Voltaire to keep her home.

Many people aren’t so lucky. Some activists are demanding that Congress take action to make sure that people can stay in their homes.

“[Voltaire] is part of a crisis of people trying to keep their homes,” Medea Benjamin, an organizer with CODEPINK told Democracy Now! “And we feel that we not only have to help individuals like Jocelyne, but we have to force congress to come back in session and put a moratorium [stop] on foreclosures and reform the bankruptcy laws so that people like Jocelyne can stay in their homes.” 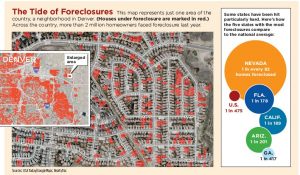